A live review of Portugal. The Man | Tufts Observer
Skip to content

A live review of Portugal. The Man 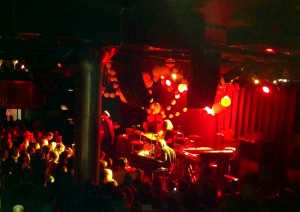 Enter the Paradise Rock Club in the Boston University neighborhood of Commonwealth Avenue. It’s Saturday night in Boston, and the low-lit, intimate venue is packed with concertgoers pushing towards the low stage. Most of the audience members are well over the 21-plus status their neon wristbands give them, and a palpable buzz of anticipation circulates through the pumped-up crowd.
Finally, after the rock band Alberta Cross wraps up their opening set, the four male band members of Portugal. The Man excitedly waltz on stage, guitars in hand. The crowd goes nuts as the band begins to play “So American” off their new album In The Mountain In The Cloud. Lead singer John Gourley’s smooth and versatile voice fills the packed room with such effortlessness that it should send the audience into a frenzy, yet this crowd isn’t really into dancing (a dramatic contrast in energy from these columnists’ beloved dubstep concerts). Nevertheless, the audience bumps along to such songs as “Floating (Time Isn’t Working My Side)” and “Got It All (This Can’t Be Living Now).” Popular enough to warrant his own “fuckyeahjohngourley” Tumblr site, the singer never wavers in passion or charisma, pausing only once during his set, in a crowd-pleasing move, to switch to a white and gold semi-hollow electric guitar.
The alternative rock band is based out of Portland, Oregon, but two of its members, including Gourley, originally hail from Sarah Palin’s own Wasilla, Alaska. A northwest influence is apparent in some of the group’s music videos, including the 13-minute long cinematic experience that is “Sleep Forever.” Premiering this year on the Independent Film Channel, the short film was used as a promotion for the band’s new album, released this past July. Gorgeous shots of the frozen Alaska landscape and Gourley being pulled by majestic sled dogs suddenly shift to a shocking and gruesome ending. This juxtaposition between the beautiful and the grim is the band’s signature style. Many of their songs mix ethereal synthetic sounds with dark and political lyrics, so that you may find yourself smiling and bobbing your head contentedly to such lines as “What a lovely day, yeah, we won the war/May have lost a million men, but we’ve got a million more.” Whoops. The popular music video for the aforementioned upbeat song “People Say” features members of the band undergoing disturbing wartime interrogation, including Gourley being forced to receive the trademark hipster triangle tattoo on his upper arm in real time.
The band has been producing albums since 2006 under a variety of labels, most recently signing with Atlantic Records in 2010. They previously released tracks through the indie label Fearless Records as well as their own independent label. Lately, Portugal. The Man has been garnering more attention from the mainstream, leading more hardcore fans to question whether the band is “selling out.” However, it seems unlikely that this would deter the passionate foursome from further pursuing and enjoying their newfound success.
Portugal played at both Bonnaroo and Lollapalooza and recently made their national television debut on the Conan O’Brien Show. Avid social media users, the band promoted the July 2011 drop of In The Mountain In the Clouds by releasing a 30-second clip of a track from the album every week on their YouTube channel, in addition to the release of the “Sleep Forever” film. In keeping with their D.I.Y. mentality and experimental attitude towards music, Gourley himself often creates the band’s psychedelic album art.
Back at the Paradise, Portugal. The Man is clearly thrilled to be playing in Boston for the first time in two years. Gourley and bass player Zachary Coruthers keep grinning at each other, and the slight, curly-haired keyboardist Ryan Neighbors appears pleasantly absorbed in his own contented world. Overhead lights that can best be described as giant strings of pearls flash blue, red, and white, much to the delight of the audience. The enthralled fans go crazy for a cover of the Beatles’ “Helter Skelter,” and the band manages to keep its cool through crowd surfer after rowdy crowd surfer. One determined man even manages to climb up on stage to jump into the audience’s arms but is shoved into the crowd by a roadie when he comes too close to Gourley’s mic. Despite the antics of the crowd and the trippy light show, it is Gourley’s voice that truly steals the night. In a show of impressive range, the singer continuously switches from a resonating baritone to his unique piercing falsetto without breaking a sweat. Finally, before wrapping up with a much-demanded encore of “People Say,” a giddy Coruthers whips out a camera and points it at the audience. The crowd happily hams it up for him, and when he gets the picture he wants, the musician smiles widely at the cheering room with refreshing enthusiasm that clearly shows the thrill the band still feels at each performance. Living the music dream, it appears the rising stars of Portugal. The Man really have “Got It All.”

Relit and Reopening: The Return of the Somerville Theatre

On Optimization: The Difference Between Trails and Women