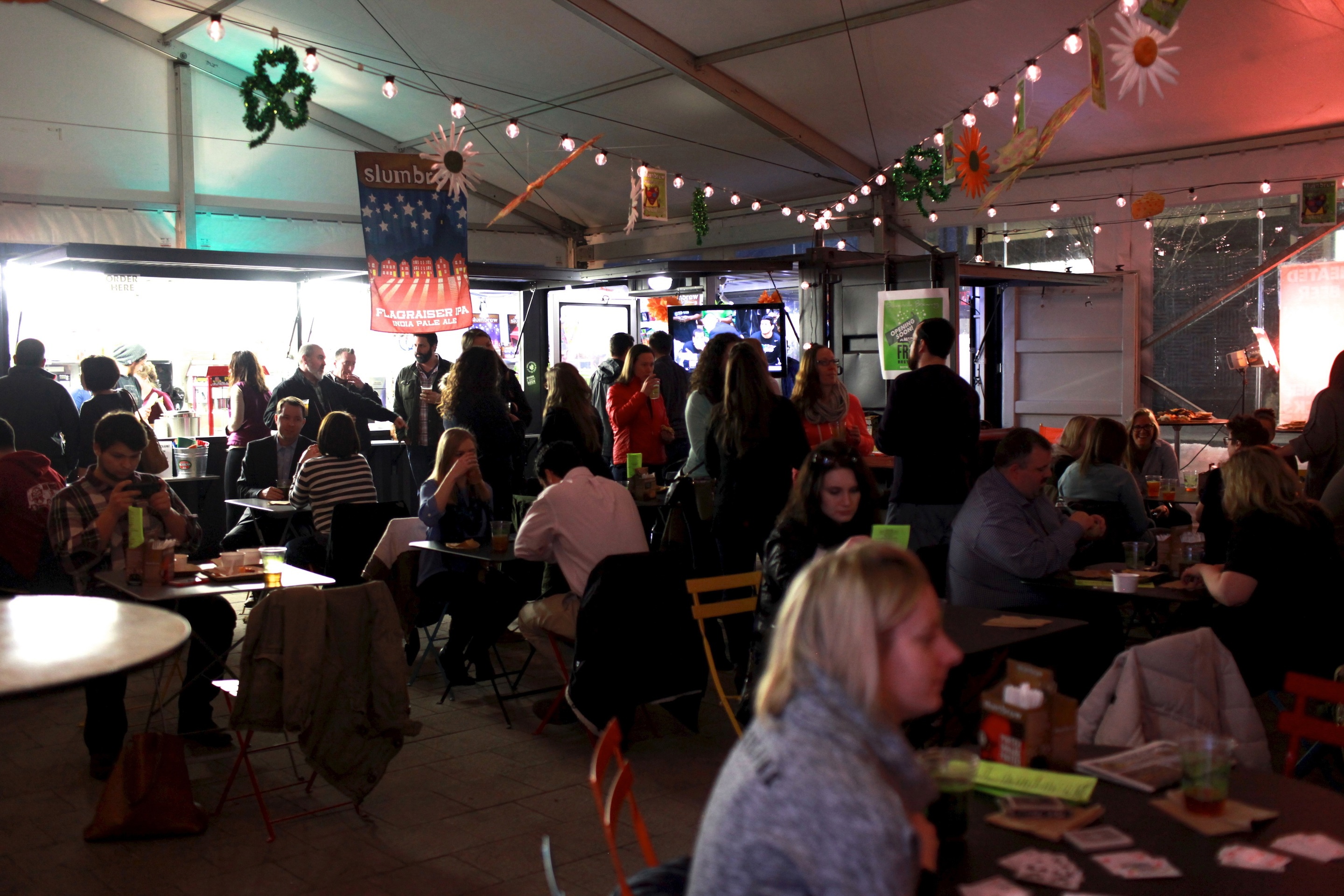 The “American Fresh Brewhouse” at Assembly Row is anything but your standard mall bar and grill. It’s owned and operated by Somerville Brewing Company—a small craft brewer responsible for the “Slumbrew” brand of beer you might see in a local liquor store—but technically, it’s not even a bar. Brewery co-owner Caitlin Jewell describes it as a beer garden, claiming it’s the only drinking establishment of the type in Boston. It’s structurally wonky, too, composed of four repurposed shipping containers grouped around a central patio with chairs and tables: one container serves food and drink, two others are quasi-gift shops carrying Slumbrew paraphernalia (like Somerville Soap Works’ “Happy Hefeweizen” soap), and the last is the restroom. 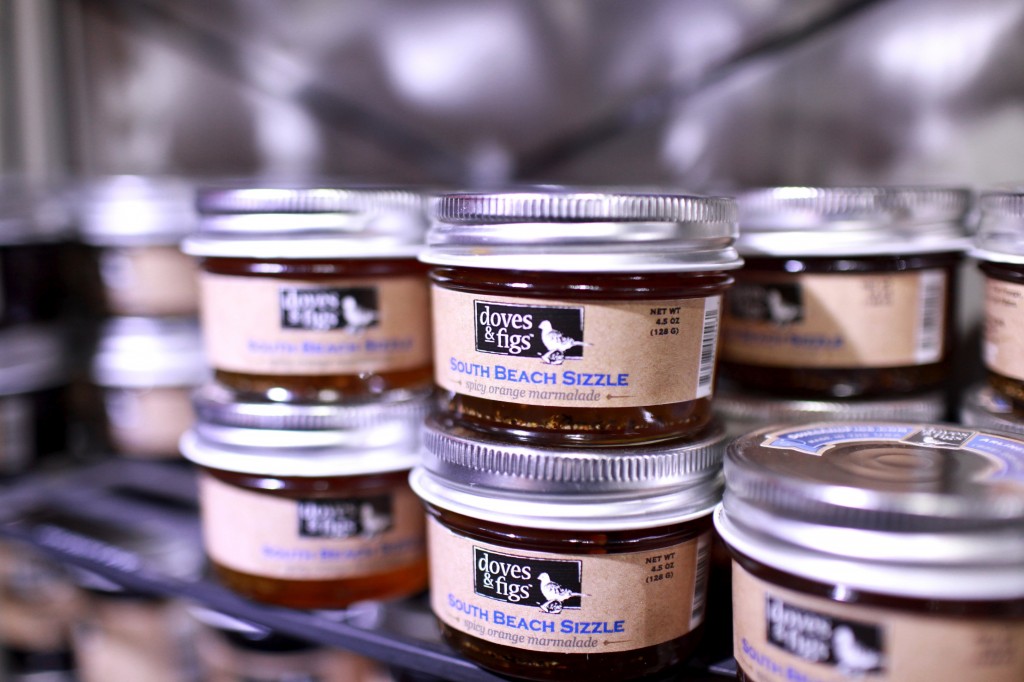 When Observer photographer Katherine Marchand and I visited in mid-March, the bar was covered by a giant tent and packed with after-work drinkers, as well as participants in some sort of charity function—“we host these kinds of things all the time,” noted the manager who showed us around. 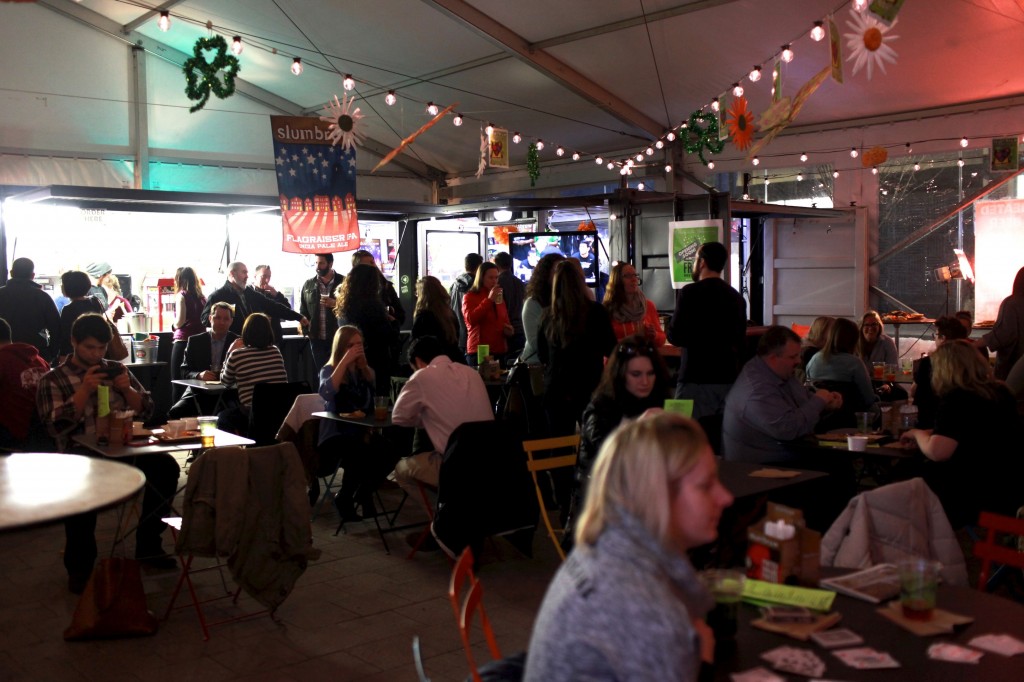 The beer garden doesn’t fit in with the rest of Assembly Row, an agglomeration of fashion outlets—J. Crew and Saks Off Fifth, among others—and higher-end chain restaurants. The next closest thing to “local food” is a Legal Seafoods outpost. To hear Jewell tell it, SBC’s close connection with Somerville life was a major part of why the Assembly Row management asked them to inhabit those shipping crates. There’s a sort of symbiosis in that relationship: SBC needs a space—they’re still in the process of building a new headquarters in Somerville and, until they built the beer garden, didn’t have any physical locations—and the Assembly Row management needs local flavor and legitimacy, something to connect the mall to the city other than the most basic criteria of physical location. 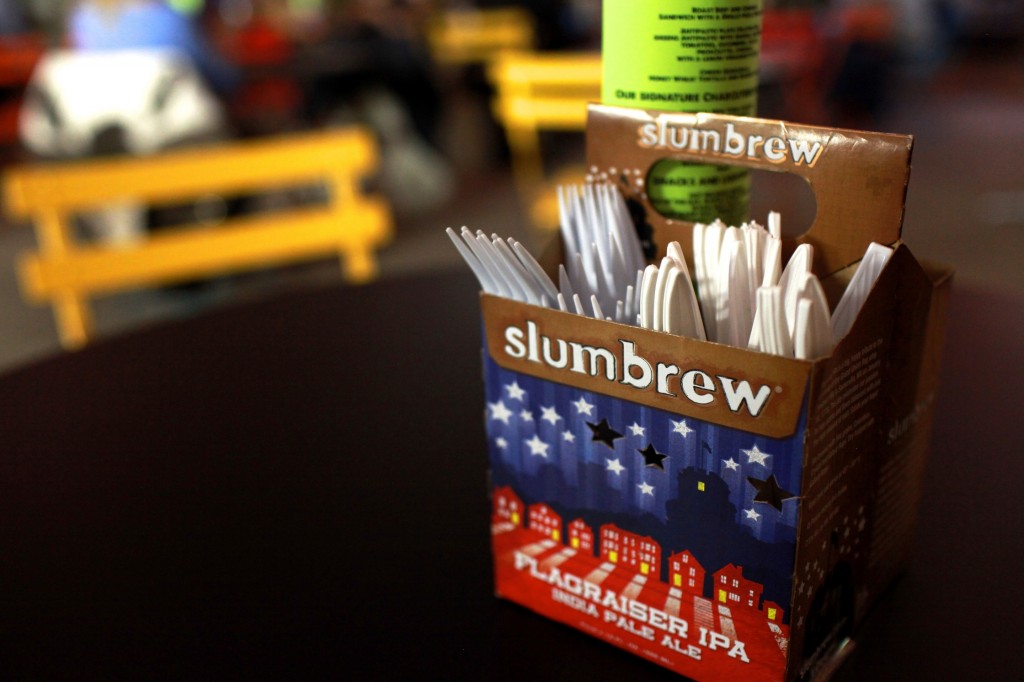 Out of that seemingly mismatched partnership comes an establishment that appears put together with the express goal of bucking the stereotypical bar image. It seems like everything in there serves this purpose—and comes with an enthusiastic description by Jewell. There’s only one TV, a relative oddity for a bar. Jewell explains that she didn’t even want to have the lone TV, but was under pressure by the Assembly Row management. Underneath the TV is a pile of board games: Battleship, Connect 4, Clue, Monopoly, and others. Jewell excitedly notes that they’ve recently added “Board Game Wednesdays” to their weekly rotation of themed nights. In a corner near the entrance is a collection of kid’s toys—Jewell says that she wants the place to be as kid-friendly as a beer garden can get and happily observes that their midday crowd during the week includes “a lot of mommies pushing strollers.” 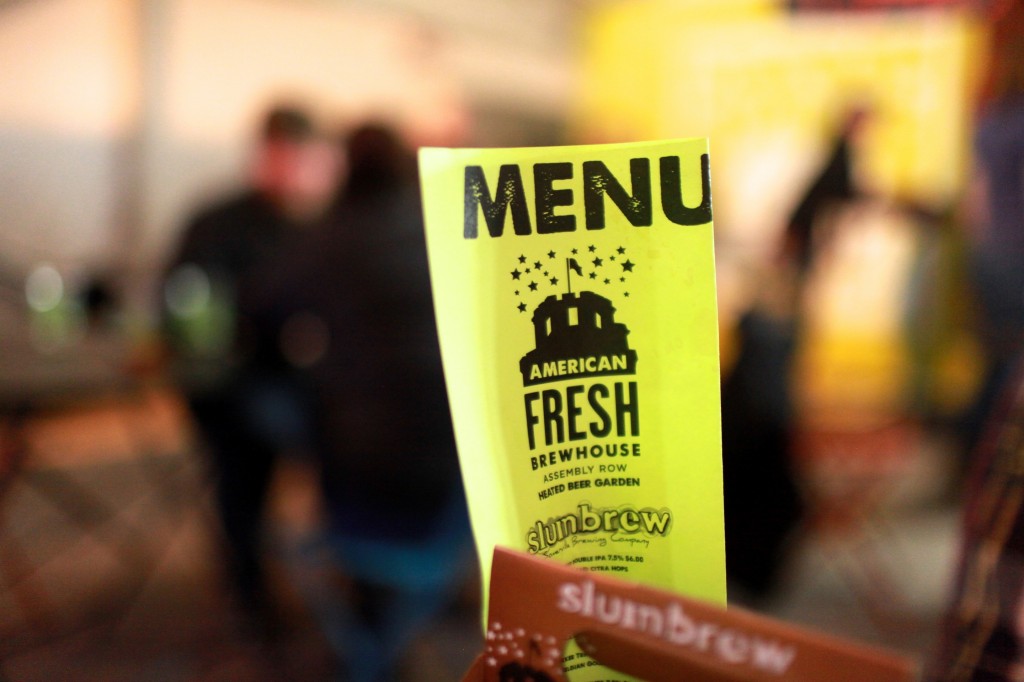 The food is pretty far removed from typical bar fare, too. Jewell notes that they tried to make a menu that includes satisfying comfort food with more sophisticated twists, pointing out their almond butter and sparkle jam (read: jam with diced ginger) sandwich as an example. Alongside classics like mac and cheese (boldly cheddary and rich, and gone in a flash) and the fluffernutter (a local delicacy) are more experimental dishes like the cheddar ale soup with pretzel bites (dense for a soup, with a distinct beer flavor that helps cut the cheesiness, and moist, salty pretzel chunks acting almost like croutons). 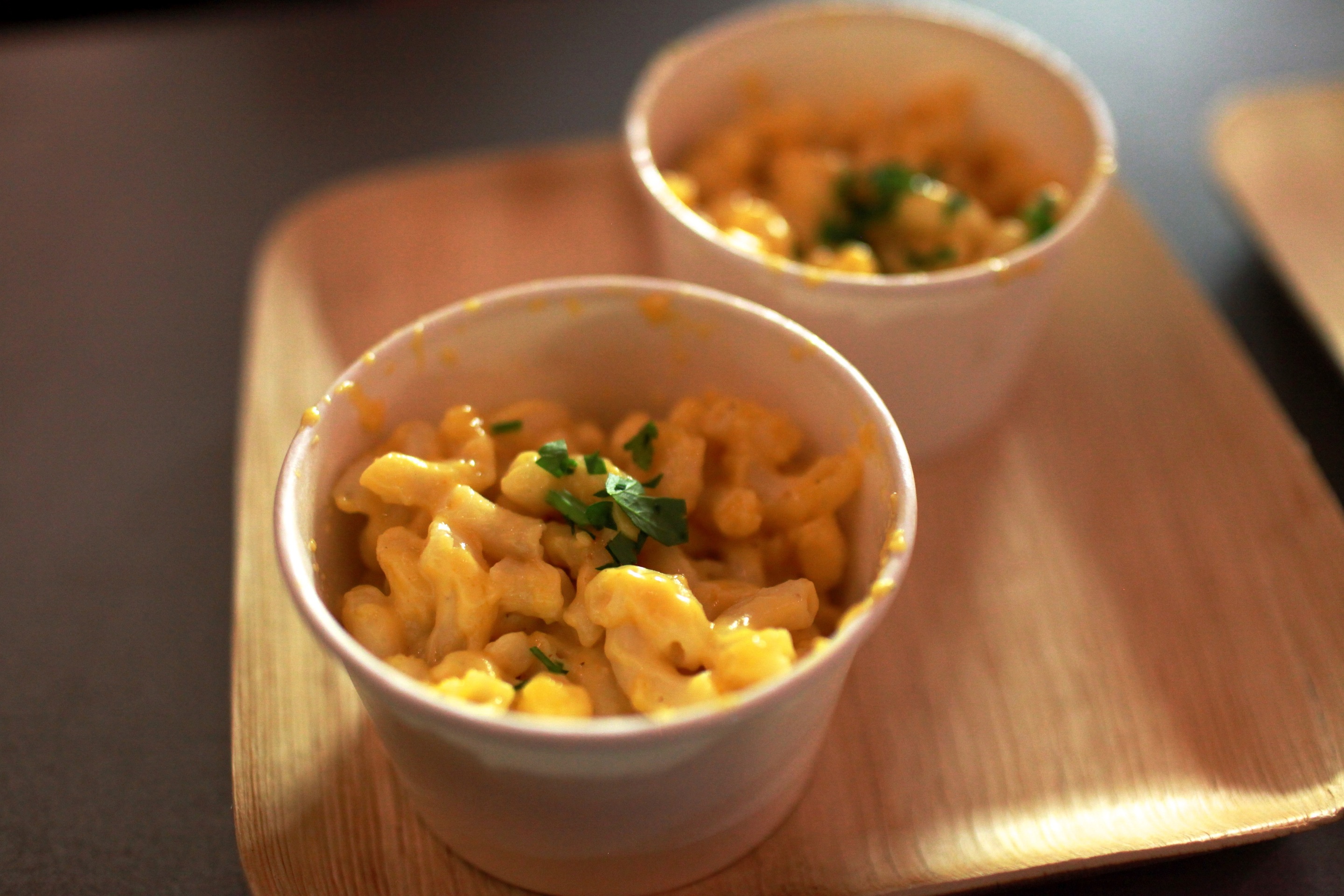 They’ve also become known for signature charcuterie boards, which feature local or regional meats and cheeses and seem to embody the spirit of the place in their mix of sophisticated and casual items. On our plate, a block of orange Vermont cheddar accompanied an artisanal brie from New York. Their most popular dish—“we sell a crapload of these,” says a manager—is a Belgian waffle topped with whipped cream and strawberries, which was a perfect dessert, cooked to the ideal waffle consistency and reduced to the proper amount of soggy strawberry-and-whipped-cream-waffle mess by the final bites. The strawberries, of course, are cooked in Slumbrew’s Happy Sol beer, and are delicious. 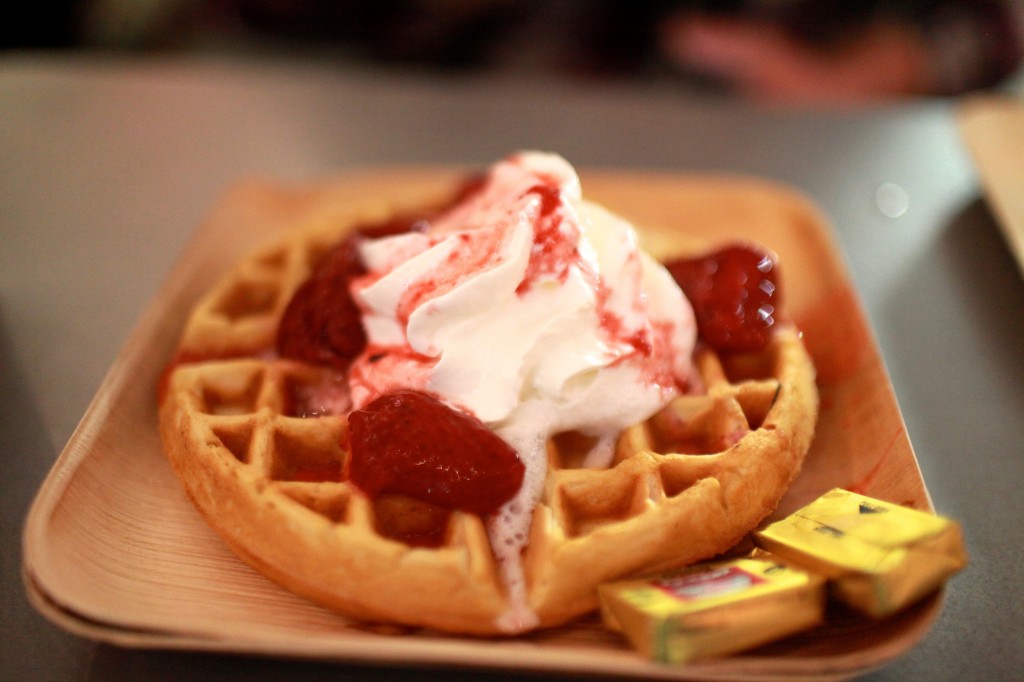 Everything is recyclable, including the plates, which resemble bamboo and are made by pressing and drying fallen palm leaves. All the chocolate they use, in their food or in their beer, comes from Taza Chocolates, another Somerville company. The pretzels are made by Wicked Twisted Pretzels, headquartered in North Grafton, and the “gift shop” section is stocked with local goods like the aforementioned Taza chocolate and Fluff. They’re even building their new location themselves. 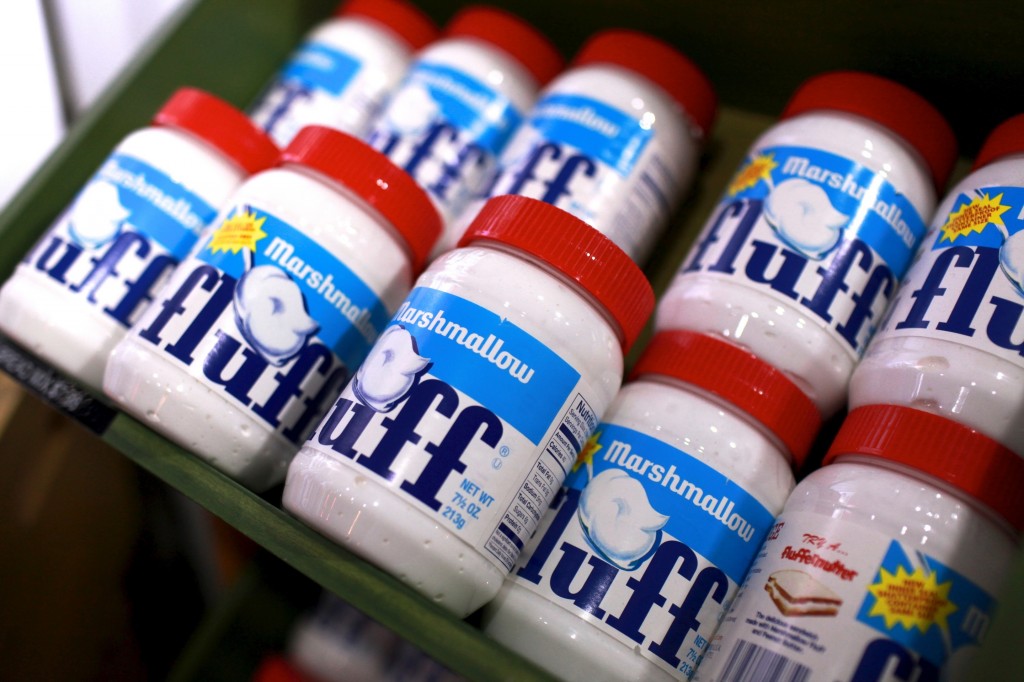 Jewell acknowledges that it can be difficult for a growing business to stay so connected to the community, but feels it’s worth it: “Somerville is such a unique place and we really try to represent that.” She points out that their Happy Sol beer, made with blood oranges sourced from a single organic grower in California, is actually so expensive to produce that they don’t make a profit on it. Instead, they continue to produce it because they feel it was the beer that got them started as a business, and owe it to people to keep it on store shelves. It’s exceedingly hard to feel guilty eating or drinking there, given the amount of care infused in everything. 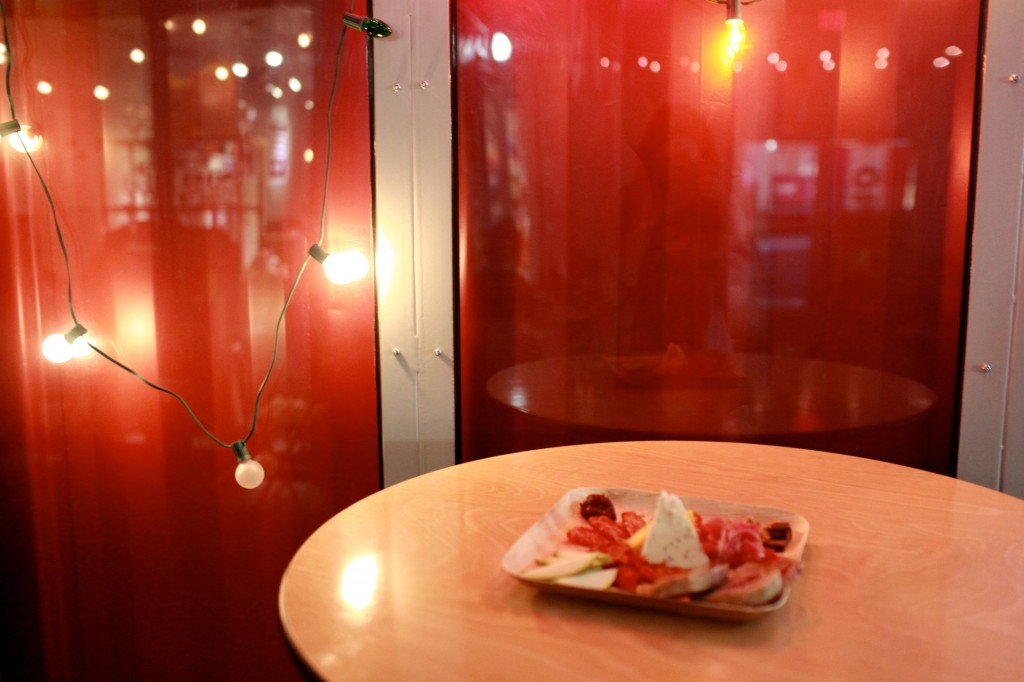 Their plans for the future, too, lay far outside the ordinary, and some would even strike me as weird at any other bar. Jewell, though, is especially effusive when asked about the future. She leads off by mentioning how happy she is to get the tent off when warm weather finally rolls around, and quickly moves on to much more ambitious ideas like a fashion show—already in the works—or some kind of temporary art installation, including performance artists or contortionists posing atop the crates. She mentions plans to install crate-top gardens and briefly thinks aloud about the possibility of hosting “drunk-gardening Sundays.” Even the most traditional expansion plan SBC is entertaining, the installation of a mini-brewery at the Assembly Row beer garden, comes with a twist: they would offer amateur brewers the opportunity to submit a recipe and make a batch of it with the planned Assembly Row brewing equipment under the supervision of SBC’s brewmaster. 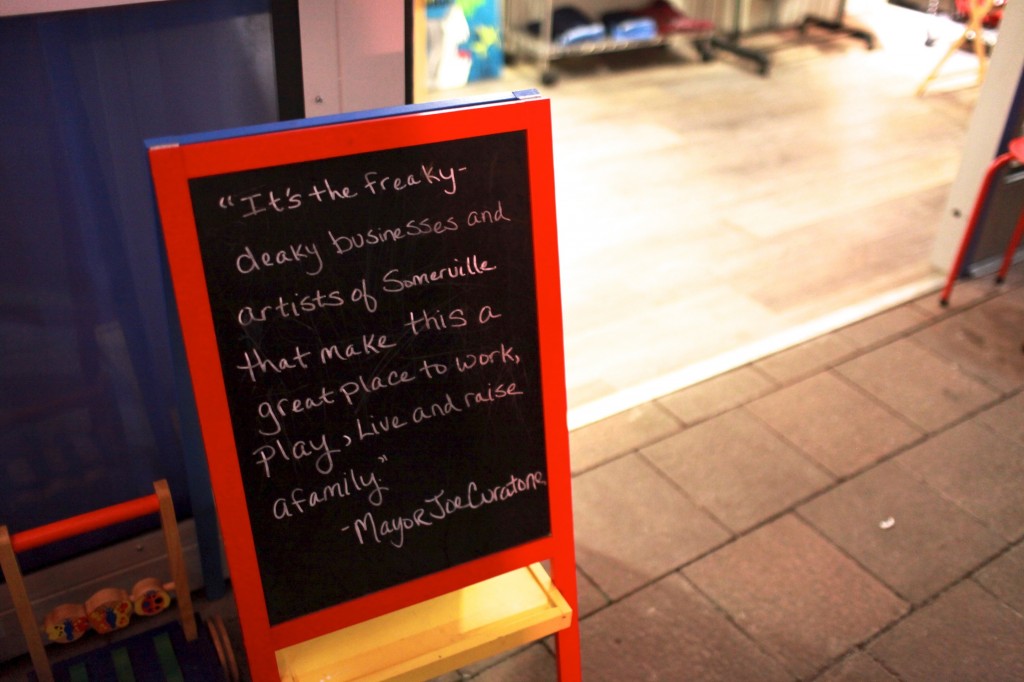 It’s an unconventional place, an outlier—but one that is entirely worthwhile, both on its own merits and within the broader context of the Assembly Row development. What’s the point of a development project that’s trying to revitalize a long-decrepit part of Somerville if it lacks meaningful connection to the town itself? Right now, Assembly Row is right off the I-93 freeway, and is filled with out-of-town, generic stores and restaurants. People can drive in from wherever, buy the same clothes they can anywhere else, and eat the same food they’ve always been eating. That is, unless they visit Somerville Brewing Company’s offbeat little beer garden by the parking lot.

All photos by Katherine Marchand.