I Plead the Tenth | Tufts Observer
Skip to content

I Plead the Tenth 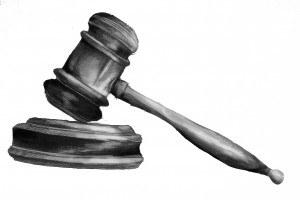 I plead the fifth. Everywhere you go— walking down the city streets, listening to conversations at a local cafe, or in your living room watching courtroom dramas—people always seem to invoke this phrase.
However, most people do not hear, “The powers not directly delegated to the federal government nor the state government fall under the responsibilities of the state government.” Most people don’t hear references to the commerce clause, or to the federal government impeding on a power specifically delegated to the states—most people don’t hear their friends “pleading the tenth.”

Recently, the Tenth Amendment burst to the forefront of America politics. Newspaper headlines, political protesters, and even coffee shop conversations have been reenergized by the idea of the Tenth Amendment, which recently landed before the Supreme Court in the Bond v. United States case.

Ms. Bond took the US government to the Supreme Court over a ruling that landed her in jail for six years, in lieu of the mere three months she could have served. After trying to poison her friend, who was pregnant with Ms. Bond’s husband’s baby, Ms. Bond was sentenced to serve six years jail-time. Ms. Bond appealed the ruling, however, claiming that this was not a matter that could be decided by the federal government and insisting that the state should decide the outcome of her trial instead (as state imprisonment is often a lesser amount of time than federal imprisonment).

This case calls the Tenth Amendment into question, as well as the power of the federal government to rule in a case such as this one. The case has yet to be decided, but it brings to light many of the underlying controversies that build the foundation of this divisive amendment. If the Supreme Court rules in Ms. Bond’s favor, states will become significantly more responsible for maintaining public safety, but more importantly, conservative political movements will gain a lot more traction in the coming months.

While this debate could likely continue for centuries, the ramifications of the Supreme Court cases that involve the issues of the Tenth Amendment are extraordinary. Teaching assistant for Tufts “Justice, Equality, and Liberty” class, Jordan Wolf, points out that traditionally, “the supreme court has read the Tenth Amendment to be very weak, meaning that most people think all it’s saying is that the federal government has all the powers given to it in the constitution but no more. The Supreme Court has cited both the Commerce Clause and the Necessary and Proper clause to show that Congress has wide power when it makes laws so that just about anything is acceptable. This gives the federal government wide power over the state.”

Whether the Tenth Amendment is interpreted loosely or strictly, in favor of state power or federal power, in favor of Ms. Bonds or the US government, the debate will rage on for years. It will undoubtedly continue to fuel a fire that continually divides the justices on the Supreme Court, forcing them to step back and understand the purpose with which the framers of the Constitution wrote the infamous Tenth.