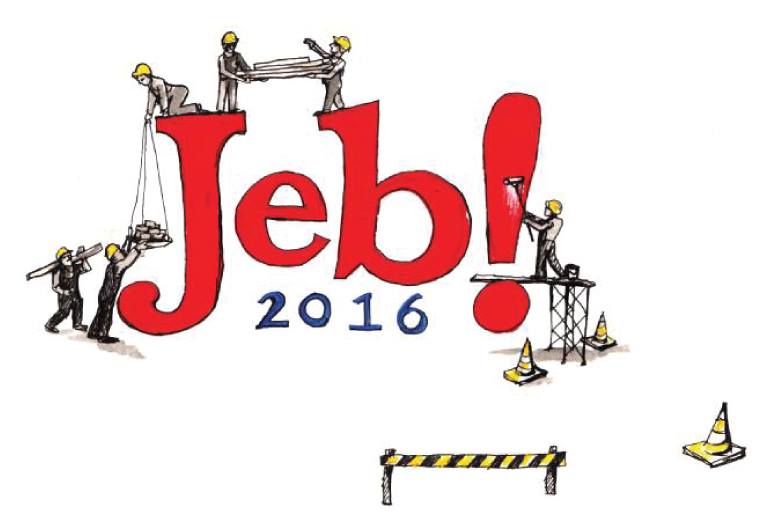 In 2008, Obama’s presidential campaign created a blue “O”—a single letter set against a white background, crossed by waving red stripes. The “O” made its way onto car bumpers and t-shirts, and was blasted throughout the social media sphere. It became a tool to rally supporters, encourage donations, and develop excitement for the campaign. In one succinct symbol, Obama was able to create a memorable trademark and convey his message of “change” to the United States.

“If you look at…the ‘90s and even the early 2000s, you would see that there was very little attention actually given to branding of political campaigns. If people had their big name and then a billowing flag next to it in some form, then that would’ve been sufficient,” said Sagi Haviv, partner and designer at Chermayeff & Geismar & Haviv, a design firm known for creating brand identities for high-profile clients such as National Geographic, Mobil, and NBC. Haviv said that since the success of Obama’s logo, branded identities have become an essential part of presidential candidates’ ability to appeal to their audience and cement themselves in the minds of voters.

With the 2016 presidential race underway, political candidates on both sides have defined themselves with distinct logos. Ben Ostrower, creative director of Wide Eye Creative, a digital studio known recently for its creation of Bernie Sanders’ logo, said that now people are thinking about campaign branding more than they ever have before. “This is the first time that especially young people consider the design of the website and the design of the logo as an extension of the campaign… It’s an opportunity to make a statement about what your campaign stands for and who you are.”

When it comes to designing political logos, Ostrower believes that a candidate needs to be treated the same as a product. “You have to be looking for what their strengths are, how they are recognized already as a brand, and their vulnerabilities and weaknesses that need to be compensated for,” he said.

To get a sense of how they should brand a candidate, Ostrower’s firm creates a questionnaire for campaign staffers with questions ranging from the “obvious” to the “absurd.” Ostrower joked about a specific question on the form: “If your campaign was a car, what car would it be?” He said that firms don’t always answer the question in a way that is helpful for the designers. “Too many folks say, ‘Oh, I’m a Tesla,’ which is a really easy answer… It’s only when folks come back with an answer like, ‘We’re a beat up Ford F150 caked in mud,’ that it feels helpful for us in terms of understanding how [a campaign perceives itself].”

But experts say that political logos aren’t only inspired by the abstract. According to Ostrower, designers often work to make these political images reflect a candidate’s physicality. “If you look at it carefully enough with enough abstraction, the logo and the brand that is created mirror their face and the ways their face is structured,” Ostrower said.

Campaign logos are also often designed with the goal of masking or compensating for candidates’ political weaknesses. Haviv noted the strategic absence of Jeb Bush’s last name in his logo and his use of the exclamation point, which attempts to create a sense of excitement around a candidate who is often critiqued for his blandness.“Knowing what we know now about what’s been happening over the last few months with the low energy comments [surrounding Bush], I think that it jumps at you as… not a natural representation of the candidate,” said Haviv. He also noted the strategic simplicity of Clinton’s logo. The campaign avoids using the candidate’s last name and instead uses an “H” icon. Haviv said this is an attempt to distance herself from her husband and his legacy. “The idea of making a sort of emblem or icon or symbol out of the first letter of her name is actually very smart strategically in order to act as more of a symbol for a movement and not remind us of the ‘90s.”

Bernie Sanders’ logo was also designed as an attempt to mask his political fragility. Ostrower, whose firm created the logo, said the nationalistic imagery in Sanders’ logo was created to soften his reputation as a radical democratic socialist. Ostrower said as a candidate, Sanders’ views set him apart enough already and that he needed to be portrayed as “an entirely legitimate, completely realistic candidate” in his logo. The logo relies on traditional nationalistic imagery. “We did use stars and stripes, but we did it conscientiously. We didn’t do it blindly… We didn’t want it to be weird; we didn’t want it to be different; we didn’t want it to be apart. We wanted it to feel like a really obvious campaign logo.”

Haviv and Ostrower noted that in addition to the images used in political logos, the fonts chosen are also influenced by candidates’ messages and beliefs. Haviv noted that Trump’s buildings use his name in serif typography—a more traditional, elegant typography—whereas his campaign uses bold, sans serif typography. Haviv observed that Trump’s campaign font is modern—“more of a look to the future”—and that its width and boldness go along with his self-presentation as a strong leader. Ostrower added that it’s one of the few logos in all caps, demonstrating confidence and strength.

The typography in Rubio’s logo is a complete contrast to the boldness of Trump’s. Both of the designers agreed that the all-lowercase lettering of Marco Rubio’s logo was a smart choice for the candidate, who is currently trying to brand himself as the “young guy in the race.” Haviv believed that it was not only attractive from a design standpoint, but was also “appropriate for a guy who wants to claim the mantle of the next generation.” Ostrower commented that the Rubio campaign has been positioning itself as “the startup campaign,” and remarked that their inspiration was likely drawn from many social media products or tech companies. Facebook and Twitter have logos with all-lowercase type that, according to Ostrower, are meant to say, “we’re user-friendly and relatable.”

Despite all of the content and messaging that can be gleaned from a simple icon, it is unlikely that a logo will change your vote. But Ostrower remained somewhat optimistic about the impact of visual political branding.

“I would argue that if Hillary Clinton is the next president, no one will identify that it’s because of her logo or her website, but it sure as hell helped.”

One Reply to “Presidential Brands: The Anatomy of Political Logos”