In September 2009, the respected weblog The Daily Beast ranked the 25 schools with the worst crime problems. Included in the top 25 were several schools that one might expect, such as the University of Maryland in Baltimore, yet the appearance of at least one school seems shocking. According to the ratings, Tufts University is the fourth most dangerous school in the country. Though the methodology of the rankings, which placed subjective weights on certain types of crime, is questionable, the results do highlight what many students are coming to acknowledge: Tufts has a crime problem.

An analysis of the crime statistics that colleges are required to provide to the United States Department of Education reveals that compared to three other schools in the Boston area, Tufts ranks second, after Harvard, in incidents of reported crime as a percentage of enrollment. In 2008, the last year for which statistics are available, reported crime at Tufts had increased over last year. Potential explanations for Tufts’ high crime 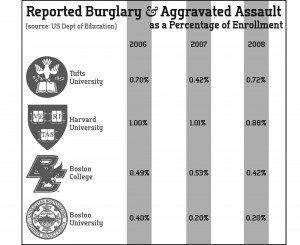 rate are plentiful. The Daily Beast points to the precarious location of two of Tufts campuses: the main campuses sandwiched between two working-class neighborhoods, and the medical school campus located in a high-crime area of Boston. While it is doubtful that the level of crime at Tufts would be as high if the university were located in Oberlin, Ohio, location alone does not account for Tufts’ crime rate. If so, one would expect universities located in high-crime areas such as Temple University or the University of Southern California, to also be prominently featured in any ranking of dangerous schools, which they are not. An investigation suggests that the Tufts community, and to a lesser extent the university itself, may bear equal responsibility for Tufts’ crime problems.

Crime prevention at Tufts relies on our community as the first line of defense. According to Sgt. Joseph Tilton, the university’s crime prevention specialist, TUPD officers can’t be everywhere, so “students are used as tools” and are considered the department’s “eyes and ears.” To train students in crime prevention methods, TUPD officers stress the importance of educational programming. Operation Awareness, the crime-prevention program that all first-year students are required to attend, is the first step in this education. As most students will recall, this orientation program provides information about blue light phones, emergency numbers, bicycle and laptop registration and the escort service. Officers also point to the ResCop program as another way to provide further training to students. Finally, the ubiquitous safety alerts in email inboxes and on building doors are also intended to raise the level of awareness in the Tufts community.

Of course, relying on the community for prevention should not and cannot be the only way a police department responds to an increase in crime. Officers cite increased patrols and visibility and a close relationship with the Medford and Somerville police departments as examples of a direct response by the department—not individuals—to increased crime. However, it is clear that university officials rely on the Tufts community to be the primary agent of change. John King, the Director of Public Safety for the university, confirms that the department will respond to some increases in crime by putting additional officers on the ground with overtime but denies that an overall budget increase for the department would be useful in bringing the crime rate down.

Tufts’ approach hinges upon the belief that a well-trained community familiar with crime prevention coupled with a vigilant police force will minimize the crime rate. But the statistics undercut this conclusion and The Observer’s investigation of security measures suggests one reason why: the system is broken.

The security situation in the Tufts Science and Technology Center (SciTech) is indicative of the larger problems facing the university. The building, located just off the main Medford campus, is home to an incredible array of expensive research equipment and a number of highly dangerous chemicals. One would expect that at SciTech, where Tufts conducts many of its expensive research programs from biomedical engineering to high-energy physics, security would be paramount. Think again. This reporter was able to roam through many restricted rooms and areas without once being detected or questioned.

Crime prevention in SciTech seems to closely mirror prevention measures in the rest of the university. Though several labs are protected by automatically closing card access doors, building security primarily relies on the efforts of the students, faculty and staff who conduct research there. Though “awareness” and crime education are in play—virtually every door is labeled with clear reminders to lock the room—many of the doors were left unlocked, some propped open by the very locks meant to secure them. Here, researchers are clearly “aware” of crime prevention measures, but fail to adhere to them. The failure of crime prevention measures is not limited to the researchers’ actions; the university has also failed to address known security risks. Several months ago, when researchers asked for video cameras to monitor certain labs, the school agreed to furnish the equipment but has yet to deliver the cameras.

The example of the SciTech building reflects the two primary problems with crime prevention at Tufts: the community’s laxness in following even the most basic prevention measures, and the university’s failure to experiment with different solutions. Of these, community apathy is the most serious. TUPD prevention measures such as residential hall FOB access and awareness campaigns are only effective if their efforts are supported by community action. “You can put locks on doors all day long, but a lock is only as good as the person using it,” declares Sgt. Tilton. “We can’t prevent personal property crimes because people don’t take the time to pack their laptop up and take it with them.” In some instances, failure to follow basic preventative measures does not just threaten the security of one’s personal property, but can endanger a larger portion of the Tufts community. Allowing individuals to “piggyback” into secured residential halls violates the security of even those students who use common sense in preventing crime. As long as students, faculty and staff are engaging in risky behavior, the crime rate is unlikely to decrease.

Though the entire Tufts community shares responsibility for Tufts’ high crime rate, certain responsibilities belong solely to the administration. TUPD officers spoke of the importance of increased police visibility in preventing crime, so why not take action to improve that visibility? Adding an extra officer to patrol the campus area on late nights can only benefit public security, as can experimenting with using security cameras. Furthermore, TUPD should work to improve the safety escort service to reduce incidents of off-campus crime. Interviews with several students indicate mixed satisfaction with the program, including one student who reports being asked by an officer why “I needed a ride since I’m a guy.” (TUPD officials encourage anyone who is harassed during a safe ride to immediately report their encounter to the chief officer on duty through the TUPD non-emergency line.)

Tufts’ crime rate can be reduced. There are areas where the university can do more, but our community must also step up. Don’t leave your laptop out, lock doors when appropriate, be aware of your surroundings and look out for each other. Simple tips and common sense can make a world of difference.