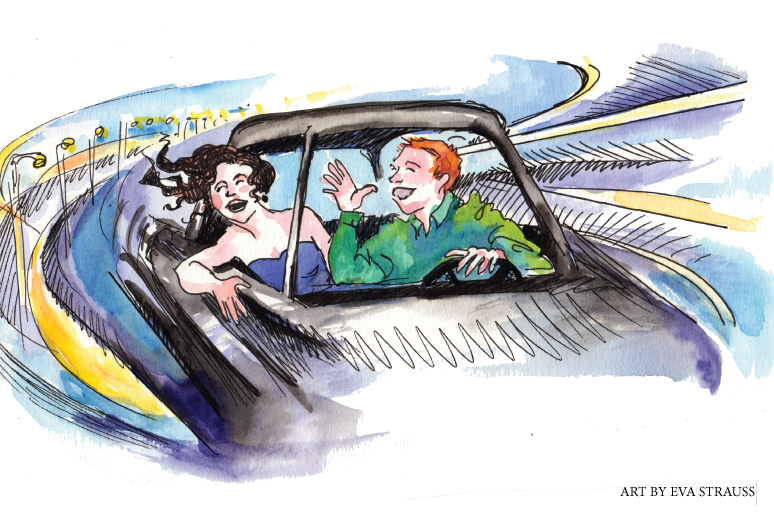 I hated my indigo prom shoes and the way they rubbed my blisters. An empty Starbucks cup kept them company on the floor of Connor’s car as I sat on my knees and tugged countless bobby pins out of my wilted hair. Connor’s aqua dress shirt clashed magnificently with his fiery hair, which glistened even in the dark. On the way to Craig’s house we played Taylor Swift’s new album, quietly at first, then deafeningly while streetlights on the highway flew over and behind us. Inexplicably, we erupted into unprovoked laughter and did not stop until his eyes were red and my makeup smeared. I stuck my head out the window and smiled at the sky, bobby pins lost to the pavement. The air whistled by, until Connor’s ceaseless laughter became nervous and split as he called for me to come back inside the car. In the five seconds of silence between tracks he asked if I was okay. My polished nails fiddled with the lace on my dress, and he raised his eyebrows when I didn’t respond. The next track began to play, and we exploded once more in fits of giggles. I struggled to form a coherent answer. I don’t remember what I told him, but I do remember what he answered, with a chuckle and a grin.

Infrequently do your role models become your friends, especially if you were like me: an awkward, gawky seventh grader complete with a retainer and two pairs of neon-colored Vans. Acutely aware of my uncool-ness, I lowered my head when Craig and his posse passed in the halls. Craig’s lanky frame, always clothed in American Apparel, would skitter through the school rehearsing choir harmonies surrounded by a constellation of well-dressed girls usually wearing floppy hats and toe rings. They were the elite. I was me. Eventually I ditched the retainer, gained some confidence, and became friends with Craig during our production of John Lennon and Me, a play about a children’s hospital. How our relationship evolved into road trips, sleepovers, and secrets, I don’t fully understand. During my freshman year—his senior year—our bond catapulted me into the Inner Circle, a world of driver’s licenses, college applications, and failed attempts to raid liquor cabinets.

Craig is how I met Connor.

I don’t remember actually meeting Connor, Craig’s boyfriend of four years, or many of the intermediate steps between being acquaintances and best friends. It’s as if we always were. Maybe because being friends with Connor was so effortless—I didn’t feel that I needed to impress him like I did the rest of the seniors. He called me Emmy-Em and held my hand when we walked downtown. We’d drive in his black Prius listening to horror movie soundtracks, then stop at Safeway to buy sandwiches or soup, depending on whether he was trying to be gluten-free that week. If it was dark we’d disclose our worries, bare our insecurities, and laugh about them in the end.

I chuckled when we walked through the automatic doors because it looked like an episode of Grey’s Anatomy. Clipboards, phones with a Code Blue button, and power-walking doctors in scrubs belonged on TV. My phone buzzed. “1435.” Connor’s room number. The elevator moved too fast, the lights were blinding, and the atmosphere of the fourteenth floor was flat. Pastel-colored printer paper sat placidly on the receptionist’s desk. She didn’t look up when we walked by. In other wings at UCSF Hospital, at least there was noise—children jabbering in pediatrics, doctors shouting in the emergency room, and monotone chatter on the general care floors. When we stepped out onto Connor’s floor it was silent, aside from the dull ding of the elevator.

I had been in the middle of my math homework when Craig called two months before to tell me the cancer was back. Stage four this time. Metastatic. Yes, they’re treating it. No, he won’t be answering his phone. I hung up—I’d gotten lunch with Connor a week before. Someone who drives you to lunch and sings along to Ke$ha can’t have cancer.

It was only real when I got to his room. Painfully real when I hugged Craig, cried in his arms, and held Connor’s hand. Most of his visitors were talking to him, sharing sunny stories and memories. I didn’t say much. I wasn’t sure what words to use. His family kept saying that there was a possibility he could hear our voices, even in the coma. Looking at his face, so tired and sick, I hoped more than anything it was true. Still, the words that had been orbiting in my brain for the last week seemed to fall flat. Even if he could hear me, I thought, what would he want me to say?

The view from his room looked like a postcard. The Golden Gate Bridge, San Francisco skyline, and Pacific Ocean. Connor wore a dark green beanie—the same one he wore when he bought my mom flowers so she would extend my curfew. An hour passed before it was time to leave. I squeezed his hand and whispered my carefully selected words in Connor’s ear. If he did hear them, I wanted those sentences to be private—just between us.

The day Connor passed, Craig and I drove with the windows down. We sang mindlessly with the radio through windblown hair. Taylor Swift came on. I smiled, and listened.