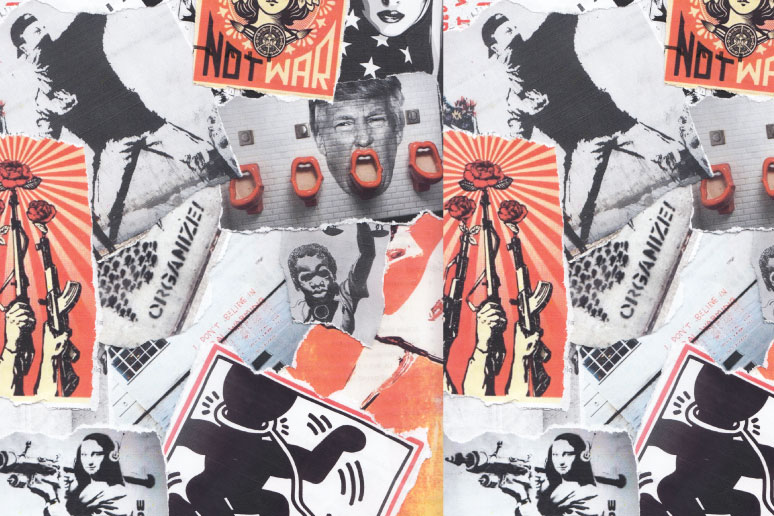 The basement of 32 Adams Street, Medford, where the student art show “Nasty Women x Tufts” is on display, is dim, but functional. White light fixtures are placed about the labyrinthine room; some hang from the low ceiling, nearly brushing atop heads. On the right-hand side, near the laundry machines, a projector is displaying School Museum of Fine Arts (SMFA) dual-degree senior Oona Taper’s moving imagery: a cyclical, developing sketch of a woman’s face, strikes of color and black flashing through. Behind the projection is a dated television set displaying a surreal, edited compilation of Janet Jackson and Madonna videos by SMFA student Camiel Duytschaever titled janetfan4life. Screenshotted iMessages are printed and taped onto a board against the back wall. They are assorted texts the anonymous artist has received, and the saturation of their words evokes an image of the boys behind the screen as impatient, aggressive, and vulgar. Protest posters from the women’s march are propped near metal pipes. Pieces of embroidery are displayed side by side. One says, “I will not set myself on fire to keep you warm,” and another, “Fuck boys get pizza.” There are two different nude paintings, each with a strong body and an unaffected air. One, by sophomore Emma Herdman, is acrylic on cardboard, titled Not convenient for you not ashamed. It depicts a woman crouching with a hand coolly on her chin, the navy background filling the space of her spread thighs. A full poem on 8.5 x 11 paper hangs along the basement’s post—it is by Libby Langsner, titled, When I’m Alone I’ll Always Have the Moon.

Around 9:45 PM, Angie Lou (A16) orates a harrowing poem, God is a 12-year-old girl. The lone microphone amplifies her deadpan tone over the now-silent crowd. “America is a swimming pool filled with spit,” she recites. Later, senior Céili Hale shares her comedy. In between speakers, the crowd haphazardly shuffles around to both examine the artwork and chat with one another. Naturally, the space becomes dual-functional: both art gallery and, for many, a social gathering.

“Nasty Women x Tufts” was primarily organized by senior Cecily Lo. It was motivated, in part, by other student grassroots initiatives, as well as the Nasty Woman exhibition that started in Queens, and had sister pop-ups in cities across the United States. According to the mission statement on the show’s Facebook page, “Nasty Women x Tufts” was a response to the discriminatory policies of Donald Trump and his administration, as well as the hatred that he and his supporters promote. The statement describes it as an invitation “to join us in solidarity and protest through art. Throughout this event we hope to provide anyone who identifies as a NASTY WOMAN—regardless of age, race, religion, and sexual orientation, gender or non-gender identification, and economic background—with a space for personal expression.” In an interview with the Tufts Observer, Lo stated, “I was taking all the submissions I got in an effort to be as uncensored as possible.” The event was also a fundraiser for Planned Parenthood. According to Lo, the event raised just under $2,500, more than five times the expected amount.

Liza Leonard, a senior who helped organize the event, told the Tufts Observer that “Nasty Women x Tufts” was inspired by Polykhrama’s first art show. Polykhroma is a student-run “independent curating collective,” according to their Facebook page, that “encourage[s] active engagement among our community with the arts.” Seven of the eight members previously worked together at the Tufts Art Gallery on the Students Relation Committee and started the group after realizing there wasn’t a space at Tufts conducive to exhibiting student artwork. The first show was held in a member’s basement in December 2016.
In a group interview with the Tufts Observer, Polykhroma members Sarah Kotis, Rotana Shaker, Estelle Tcha, Ella Huzenis, and Eran Sapaner described their intentions for the collective.
“It’s not trying to be some sort of uptight endeavor; we’re trying to make it fun and accessible. We want to encourage engagement with art, making that a setting that people would want to go to and walk around and be a place to see performances.”

The group discussed the limitations of curators who are not part of the student body, and how this sometimes leads to lost nuances, and a misunderstanding of how to cohesively manipulate space. The curators prioritized the flow of the event, which reflected the group’s commitment to accessibility. Diverse contributing artists were thrilled with the size of the turnout, and the group was proud of the space they created. According to Kotis, “It was great to have a social event that was focused around something, and an event that was important and can spark conversations.”

While “Nasty Women x Tufts” had more of an explicit political message, Leonard noted that Polykhroma’s December show created an atmosphere centered on the experience of the visitors. She said, “I think it was really successful and we saw that this was something at Tufts that was lacking. People are interested in going out and socializing, but not just standing around and drinking. They’re interested in talking about things and are interested in what other people are doing beyond just a frat party or a house party.”
Conflating the college nightlife scene with artist-oriented and expression-based projects is not unusual or ahistoric behavior, particularly in times of societal tension. The stigma of college parties as foolish spectacles has prevented many from recognizing the potential of these social spaces.

How Booze Built America, a 2012 docuseries from the Discovery Channel, discusses the role of the tavern in its premier episode, “America’s Revolution.” During colonial times, the tavern was an effective way to encourage trade amongst farmers and businessmen. A staple of colonial American culture, the tavern was a respected space that was both politically and socially important. And in Ancient Greece, discussions of the symposium, elite drinking events, were not ridiculed, but memorialized. This connection between alcohol, gathering, and critical thinking has transcended time in important ways. According to Quartz, over the weekend of January 26, 2017, French consulates in 30 cities across the world, including Brooklyn and Los Angeles, held a “Night of Ideas,” which the media referred to as “intellectual rave parties.” New student-focused initiatives led by Boston museums, such as the Museum of Fine Arts and the Institute of Contemporary Art, that involve all-night, booze-incorporated events harken back to this coupling of social activity and provocative idea-sharing.
Unlike the French consulate or a museum board of directors, the recent events emerging around campus operate independent of institutions. It is important to recognize that places like the cooperative-living Crafts House, the Arts House, and many other pockets of Tufts students, have been hosting art-focused gatherings for decades. In correspondence with the Tufts Observer, Crafts House resident and junior Nicole Joseph describes some of the fun items, from large puppet heads to cockroach murals, displayed at their events. “We like to create a lot of art for the parties, which we think showcase the spirit of the house,” She said. “We like to provide an inclusive and fun time for all. We hope to be a place where people can cut loose and hang out with their friends and get to know new people.”

On the other end of the spectrum are sororities and fraternities, which no longer occupy the epicenter of campus social life. The recent suspension of virtually all Greek life activity is a historic moment in Tufts’ history, and it is interesting to see which spaces have emerged to fill some of the gaps. Increases in local bar-hopping are now being matched by events like Nasty Women x Tufts, Polykhroma, all-night techno dance parties, and house parties turned into Planned Parenthood fundraisers. Within the Tufts student body, social gatherings are often associated with wealth and exclusivity (just like the school itself), but increasingly, students are seeking spaces to gather in imaginative, welcoming ways.

Polykhroma’s student-oriented, inclusive structure seeks to disrupt convention in a different way. “We’re independent of Tufts, so that’s a really important part,” explained Shaker. “We are just people—we met through the Tufts Art Gallery—but we came together and didn’t want to have restrictions and everything imposed on us by Tufts as an institution. We try to make it clear we are not Tufts affiliated.”

“I wanted it to be an alternative thing to do on campus,” said Lo about “Nasty Women x Tufts.” “Not a party, but also not a movie, or something you would do regularly. I was surprised because it brought together a lot of circles of people who you normally wouldn’t find at the same party. And I also think people are looking for something to do on campus. I felt really good being able to provide that to people, and from the feedback I heard, I feel like it was worth their time.”

From art galleries to basement shows, there is a developing trend among Tufts students claiming independence in the spaces they can create. Seeing how a Somerville basement can be transformed into an art gallery, a comedy club, or a Berlin-like light show is a necessary reminder of the valuable potential of social space. In a time of seeming powerlessness, these reimagined spaces offer a meaningful way to harness the power of art and collaboration.

Women Take the Floor at the MFA