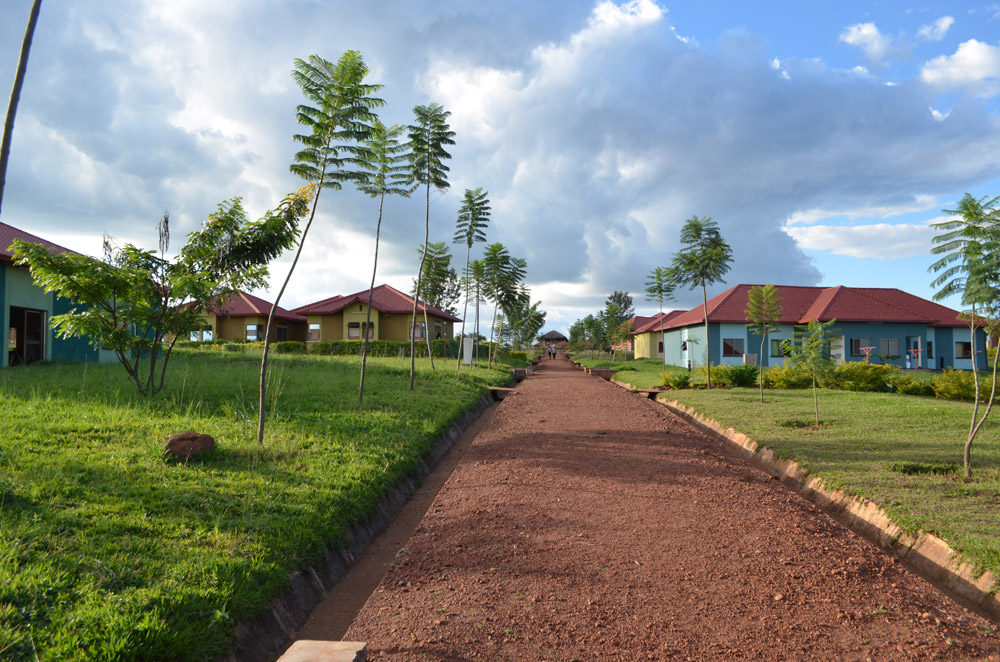 As the plane carrying the 21 members of our Tufts Hillel interfaith service and learning trip to Rwanda descended onto the tarmac at Kigali international Airport, the city lights below juxtaposed against the darkness of the areas outside of Kigali, Rwanda’s capital, served as the first reminder of just how different Rwanda was from Tufts and Boston. Outside of Kigali and Rwanda’s other major cities, many people still live without electricity and other simple aspects of life that we consider necessities. We landed in a country that is still trying to build up its infrastructure, grow economically, and work to overcome the national shockwaves from the Hutu-Tutsi genocide 18 years ago.

Led by the Cummings/Hillel Program for Holocaust and Genocide Education, the service and learning trip to Rwanda took us to Agahozo Shalom Youth Village (ASYV), a Rwandan orphanage village about an hour outside of Kigali. Created six years ago by Hillel board member Anne Heyman, ASYV offers a home and four years of intensive education to each of the 500 students currently living there. I had heard that same tagline about ASYV and how it offered students a “chance for a future” time and time again in the months leading up to our trip, but when I stepped off the plane I was still unsure of how the village operated and what effect ASYV could have upon the future of Rwanda.

There’s nothing quite like waking up, throwing on some clothes and stepping outside to see Rwanda in the daylight for the first time. From the doorway of my room, I could see down into ASYV’s farm (from which the village plans to become self-sufficient in the coming years) and beyond that, miles and miles of green fields and hills. Waking up in a new country is always an interesting experience, but waking up in Rwanda, a land and a culture so different from our own, was especially shocking. After the bustle and noise of Boston a day before, the first morning in Rwanda was absolutely silent. Rwanda is a particularly beautiful country with a particularly devastating history, and interacting with Rwandans during our trip convinced me of their determination to turn the page on the ethnic divisions that tore apart their country.

After admiring our first sunrise in ASYV for a few minutes, the Tufts group set off across the village for breakfast with the entire student body. That first breakfast of hot porridge and one bread roll for each person was a little unnerving. The Tufts students tried to come across as friendly and approachable while the ASYV students tried to communicate in English, a language that many of them had only begun to study once at the village. After we hurdled the initial nervousness, the ASYV students shared stories about their times back home and in the village and I was just as ready to tell them about Tufts and my hometown in New Jersey. I was at first worried that I wouldn’t have enough in common with the students to hold a conversation with them; after all, these kids had grown up in a very different world than I had—what could I tell them about my life at home that they’d find interesting? But after I was asked at least 10 times in the first 24 hours about my favorite rapper, my favorite soccer player, and whether Tupac was actually dead, I figured out that our interests weren’t that dissimilar at all (and that not one of them was happy to hear that Tupac is, in fact, dead).

The important aspect of bonding with these students, of course, lies in recognizing that only the struggles of Rwanda have kept them from being like us college students and global citizens. ASYV has been working to ensure that each student has a chance to overcome the horrors of the 1990s that left an entire generation of Rwandan youth without families and without a clear future. Each incoming class is organized into houses of 16 women or men, and those 16 students and their house ‘mama’ live together in the same house for their four years of education at ASYV. For many, these groups of 15 classmates and a house mama become the first families they’ve ever had. After classes during the week, the village offers extracurricular programs and student groups ranging from Leadership Club (in which students work together to address and resolve school-wide issues that arise during the year) to the Modern Art program (in which one can study perspective, sketching, and painting) in which each student can partake. That said, even though ASYV’s commitment to its mission was evident through the students’ progress in school and in the village, it would have been impossible for me to appreciate just how far Rwanda has already come since 1994 without our group’s trips to genocide memorials in Kigali and in Murambi.

The Murambi Genocide Memorial is located in Murambi Technical High School, in which over 50,000 Tutsi sought refuge during the genocide and instead were betrayed and slaughtered by the Hutu government over the course of a few days. Bodies of men, women, and children lie preserved in lime in buildings around the high school, a frozen testament to just how real the horror was. Standing outside of the high school, I began to understand the contradiction that Rwanda embodies. Murambi Technical High School sits in the center of a circle of rolling hills, all breathtakingly beautiful and silent and representative of how fantastic Rwanda can appear; yet the patch of grass that I stood on at the high school was the same spot upon which tens of thousands of Rwandans had been murdered just 18 years ago.

We spent our time at the high school talking with a Tutsi survivor of the genocide in 1994. He served as the principal of ASYV until this past year, and so had a strong grasp of the importance of separating the Rwandan youth from the ethnic divisions of past generations. Before we walked around the grounds to see for ourselves the bodies of those murdered at Murambi, he painted a picture of the genocide through his own eyes: how roadblocks were set up across the country to capture fleeing Tutsi; how he left the country to train with the Rwandan Patriotic Front (RPF), the resistance movement that eventually retook Rwanda from the Hutu government; how he spent years without knowing the fate of his mother, brother, and sisters. He also made it clear to us that the genocide of 1994 was not a freak occurrence; rather, it was the result of European intrusion into and division of the Rwandan people and of decades of persecution of the Tutsi minority by the Hutu government. The Rwandan government under Paul Kagame (who has held power since he led the RPF back into Rwanda in 1994 to topple the Hutu government) has banned Rwandans from discussing the Hutu and Tutsi ethnicities in an effort to close off all historical prejudices that tie the Rwanda of today to the ethnic chaos of its history. The nation is slowly moving away from 1994, but there remain people like the Tutsi survivor we met who will never be capable of fully forgiving what occurred. For many of that generation, the genocide will forever be too personal to forgive. It is for that reason that many Rwandans believe this current generation, including the students at ASYV, is the key to the future of the country. They must be ready to overcome the horrors of their childhoods in order to lead Rwanda toward a brighter future.

While I was playing soccer during the school week with a few of my friends on ASYV’s boys’ soccer team, it was easy for me to forget just how dark Rwanda’s future must have appeared in 1994. A country torn apart by international colonialism and ethnic genocide must have seemed incapable of regrouping into a nation that prizes steady economic development and the protection of all its citizens. But in June 2012, that hope seemed more than possible. It seemed to grow with each of the ASYV students actively taking control of their education and of their lives. I was told by many of the teachers and counselors that when the incoming students are asked in their first days at ASYV what they would like to do when they grow up, many can’t even imagine a lifestyle beyond subsistence farming or selling goods in a city to make ends meet. Only halfway into their first year, however, my friends confidently told me that they were planning on attending university, becoming a writer, or returning to ASYV to teach. The change in each student from a steady learning environment and home is palpable, and ASYV directly causes that change. The same students who are playing soccer, leading the school’s student government, and learning agricultural and irrigation techniques are those who will return to their hometowns and reenter Rwanda’s civil society after graduation, begin to better their own communities step by step, and ultimately affect the future of Rwanda.

I’ve continued talking with a few of my friends at ASYV over Facebook and email, and their updates on their lives and studies at the village validate my belief that Anne Heyman’s and Hillel’s investment in ASYV is a direct investment in the betterment of Rwanda. One of my friends recently emailed me to tell me about how his schoolwork’s been going since I left, and he made sure to include in the email a few Chinese phrases that I had taught him. Another friend I have on the soccer team has been keeping me up to date on how often the team’s been playing and how the latter half of the year at ASYV is shaping up. It’s communication like this that I had hoped for since I boarded the plane to head back home from Kigali—proof that these students are just as committed to maintaining our friendships and their studies as we are to doing our part to make sure ASYV continues to stand as a testament to Rwanda’s progress. I went to Rwanda to better understand the genocide and ASYV, and came back with an even greater appreciation for the importance of each of ASYV’s students for the future of their country.

The Future of British Politics

Jin, Jiyan, Azadi: The fight for female autonomy in Iran at Tufts