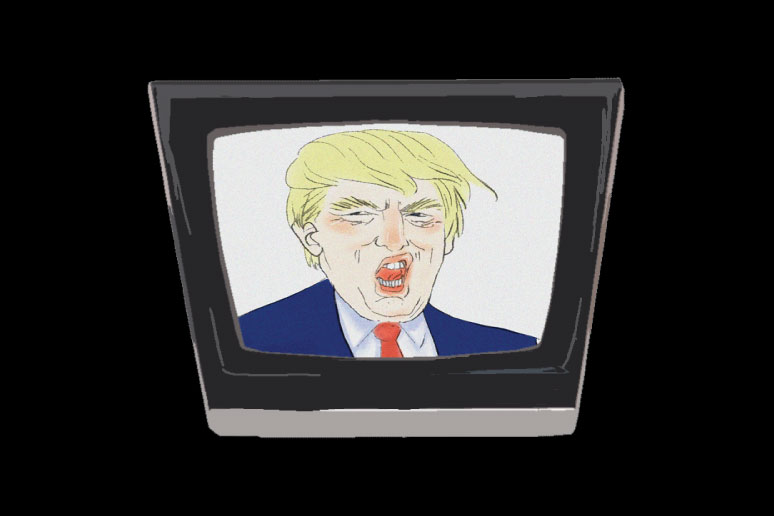 After his second presidential debate appearance, Donald Trump was engulfed in a maelstrom of controversy. A video of him talking about sexually assaulting women with NBC Today host Billy Bush had just leaked, and Trump was the subject of ridicule throughout the media both for his comments and his mannerisms. Much of the mockery came from the realm of late night comedy. Seth Meyers remarked that Trump walking around during the debate looked like he was “waiting for his microwave burrito to be done.” Stephen Colbert, in his at-home, post-debate coverage, composed an entire video of Trump sniffling, suggesting that Trump may have a cocaine problem. Jimmy Fallon ran a sketch in early October called “Donald Trump calls Madea,” where he dressed up in his favorite blonde wig and pretended to campaign call an elderly Black woman who despised him. In an election cycle filled with outlandish remarks, the likes of Fallon, Colbert, and Meyers have been turning more and more to political material to provide cold opens and heavy hitting jokes for their programs.

This is only a tiny sample of the content produced by mainstream late night comedians, not accounting for the more politically oriented hosts like Trevor Noah, Samantha Bee, and John Oliver. These shows frequently have fewer limits than mainstream late night, and so attacks are more vicious, and often make a more serious attempt to tear apart Trump’s racist and sexist rhetoric for their audiences. In reference to the video released of Trump talking about how his fame allowed to him sexually assault women, Last Week Tonight host John Oliver compared him to “a spray-tanned Furby eating KFC.” Full Frontal host Samantha Bee—in reference to the same video—said, “In less than a minute, these two leering dildos turned their rape culture banter into a rape culture power move that demeaned and violated Zucker in ways she is only now finding out about.”

While these two types of commentary may seem similar, they are vastly different in their potential effects. The first type tends to leave candidates relatively unharmed; jokes about the size of Trump’s hands are similar to jokes made about other political candidates in other elections. Trump takes no more of a hit for the size of his hands that Hillary does for jokes about her intensity, or a candidate like Mitt Romney did for his wealth.

“There’s a difference between poking fun at Trump’s hair and using humor to draw attention to the racism and misogyny that has defined Trump’s campaign,” said Boston University Associate Professor of Television Studies Deborah L. Jaramillo. “One method just mimics the typical mockery that accompanies a reality show star, and the other winds up being a critical commentary. Laughing at Trump for being defensive or for having small hands tends to render him safe—a harmless, vain rich guy.”

This means that the mockery many mainstream comedians have leveled at Trump may actually have had a harmful effect on political discourse. By making fun of Trump but refusing to call him out on his racist and sexist comments, his behavior is normalized—it becomes something audience members come to expect, allowing them to gloss over the offensive nature of his language.

Instead, more pointedly political commentary may have more of an effect on audiences. The criticism Samantha Bee has lobbed at Trump frequently indicts him for his misogyny and racism, something that most other late night hosts have failed to do. “Perhaps because she is a woman and has more to lose than most of the men who host late-night talk shows, Samantha Bee has emerged as the smartest satirist on TV and the one with the foresight to take Trump seriously,” said Jaramillo. Bee has been averaging about 2.2 million viewers per night since July, which is well above the 1.3 million viewers drawn by the more established Daily Show with Trevor Noah. Combined with the audience of John Oliver, who draws about 4.1 million viewers weekly between broadcast and online streams, the three have a combined reach of roughly 7.6 million viewers per show. While it doesn’t match the combined power of Fallon, Kimmel, and Colbert at 9.1 million viewers per show, per night, it shows the reach and power of political satire outside of mainstream late night.

Supporters of Hillary Clinton haven’t seemed to mind late night’s critiques of Donald Trump and his rhetoric. “I think John Oliver uses comedy to point out just how ridiculous Trump is as a candidate,” said Tufts student and avid Clinton supporter Abby Schmidt. “If we can’t laugh about him, we’ll cry about him.” Clinton said in the second presidential debate, quoting from Michelle Obama’s speech at the Democratic National Convention this summer that “when they go low, we go high,” expressing her unwillingness to level aggressive, personal attacks against Trump. Late night comedy has certainly been a help to her in this aspect. Because political satirists like Oliver and Bee have been hitting Trump hard for many of his comments, she hasn’t had to, allowing her to focus more on issues and defending herself against his personal attacks on her in media and debate.

Many have wondered what impact all this attention on late night and other media platforms has had on Trump’s success in the polls, and whether it has helped him rise to his position as the Republican presidential nominee. The answer, for Politico reporter Jack Shaffer, was no. “The media didn’t create the Trump political phenomenon. The real origin is far more interesting: Trump artfully created the media that in turn created Trump the presidential candidate,” Shaffer wrote in an article for Politico last June. Trump has been able to turn decades

Trump has been able to turn decades of media exposure into a powerful presidential campaign. Indeed, Trump was a household name even before the beginning of the 2016 election cycle, and he has bet on the fact that any media exposure is good media exposure. His Q score (a measure of how positively or negatively he is perceived by the American public) sits at negative 45, just north of serial rapist Bill Cosby at negative 52.

While Trump has been the target of mockery, he still has a chance of winning the White House. According to the USA Today poll tracker and aggregator, he trails Clinton by a margin of around 5 percentage points, but still could pull together an upset in November. Trump is still under fire from many late night comedians, but the exact effect it will have on the outcome of the election still remains to be seen. As November 8 draws closer, America will learn if satire still has true political potency.